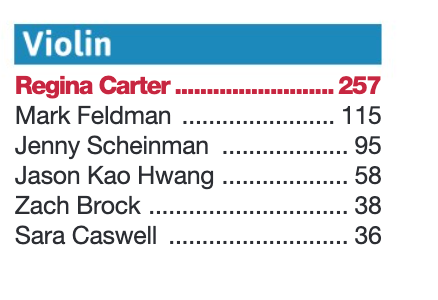 My thanks to the 2021 Downbeat Critics Poll for their votes. I share their love with all the musicians I have ever played with. We make this music together!

Listen to and purchase at Bandcamp.com

Recently I watched an hour-long television program that focused on Asian American issues with a lively panel of Asian American scholars and leaders. Having never ever seen a show like this before, I was stunned. It made me reflect upon my life as a mostly invisible minority. I am often the only Asian American on stage, and for that simple reason my presence for many would be a performance of ethnicity.

Asian American artists create in a cultural industry where the power structure has an enduring fetish for Orientalist fantasies.  Even for works of genuine integrity and validity, any fortuitous commercial success usually has linkage, however involuntary, complex and subtle, to any number of Orientalist tropes.

With people to whom an Asian face is the Other, this cultural history is woven inextricably into the unconscious biases that can progress into explicitly racist violence. Clearly this perpetually churning, degenerative process has fueled the 150% increase in anti-Asian hate crimes this year.

I am united with Arts for Art to stand strong against this hatred and violence towards Asian Americans.

The music of jazz has always embraced a wide diversity of individuals and sounds to respect, celebrate and defend the humanity of all people.

Violinist/violist Jason Kao Hwang's trio with Ken Filiano (bass) and Andrew Drury (drums) is one of the most finely honed small groups in the improvised music scene...It all comes together on the closing "Defiance", the telepathic interplay, the storytelling, the rotating narratives and the sterling musicianship.  Robert Bush, New York City Jazz Record. Read Full Review

The veteran New York violinist/violist Jason Kao Hwang, who's worked with Anthony Braxton, William Parker and the late Butch Morris, among others, creates work under his own name that resist categorization:  Sometimes it's jazz, sometimes cham,ber music and sometimes entirely uncategorizable ... Which is to say that this is heavy, profound music. - Philip Freeman, Downbeat Magazine  Read Full Review

...features playing of the high-wire, rough-and-tumble variety, the trio's expressions rooted in the rapport the musicians have developed over time. Such unpredictability makes for exciting and engaging music, and the greatest takeaway has less to do with the compositions and more with the always evolving interplay between them.  Ron Schepper, textura.com

With 15 years of mutual collaboration and musical understanding, Hwang, Filiano and Drury have developed a natural, fascinating language that is fully expressed on Human Rites Trio. - Filipe Freita, jazztrail.net

It's a marriage of complete control and artful abandon that's never short on surprise...Jason Kao Hwang, Ken Filiano and Andrew Drury know themselves well enough to be lost and found in each other's sounds, and that beauty points to what's right with Human Rites Trio's music. - Dan Bilawsky, All About Jazz

The near-12 minute opulence of the pure, thrusting, raw string-shredding expressionism through hybrid Afro-Asian ecumenicism, of the dynamic 'Battle for the Indelible Truth' is a breathtaking work of musical art, in and unto itself, and then the album comes to a close on the fingering-finesse, and drum/percussion, dynamic call and response between composition and improvisation core found within 'Defiance.' - Anne Carlini, Exclusive Magazin

The three virtuoso musicians are recognized for their exploration of the potential offered by the respective instruments. Individual voices intertwine in such a way that at every moment our senses are impacted in an unpredictable and deeply intentional way, creating firm bonds that unite musicians and listeners. - António Branco, Jazz.pt

…when it comes to improvised music, I consider Jason’s violin/viola work to be right up there at the TOP! … I give Jason and his bandmates a MOST HIGHLY RECOMMENDED rating, with an “EQ” (energy quotient) score of 4.99 for this highly engaging sonic experience.   - Rotcod Zzaj, Contemporary Fusion

Read all the complete reviews under Press

Below is a video of Jason Kao Hwang/Human Rites trio with music from the CD.

My thanks to the 2020 El Intruso International Critics Poll for selecting me first for Violin/Viola.  My thanks for the votes in Downbeat Magazine's 2020 68th Annual Critics Poll.

Sharing all this love with all the musicians whom I play with. We make the music together.

Listen to and purchase Conjure at Bandcamp

.. the two created these fragile and delicate moments, rich in musicality and feeling, one on violin and viola, the other on piano and to the vibraphone. They are engaging atmospheres in which the accent moves on pathos, communication, beyond the desecrating or angry moments of the free with which the two in the past have had to do. Among the most beautiful moments Below Zero, with the pizzicato on Hwang's violin that meets the vibraphone, is a very special atmosphere that the two manage to create in improvisation. Overall it is an incision without moments of emptiness, which involves the listener from beginning to end, of two musicians in a state of grace who had something real to say to each other and made it public. - Vittori LoConte, musiczoom.it   Read Full Review